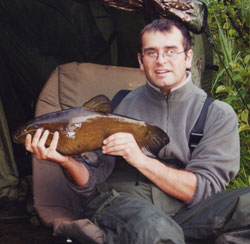 Mark Healy poses with one of his better specimen tench.

Tench are found all over the midlands and also in the canals – the Royal, the Grand and the Barrow – which connect Dublin with the Shannon and the Barrow systems respectively. The stretches of the Shannon at Lanesborough and Shannonbridge which are artificially heated by water from power station outflows, have produced several Irish record tench and tens of specimen fish. Limestone loughs in County Clare have also recently produced many specimen tench.

Tench are easily recognised by their minute scales, which give them an almost scale-less appearance. They have a dark olive or blackish colour. The fins are rounded and the tail is almost unforked. It is possible to distinguish the sexes based on the shape of the pelvic fins on the underside of the body. Male fish have very large spoon-shaped fins, while those of the female are longer, more pointed and triangular in shape.

Tench spawn later in the year than most of the other Irish cyprinidae species and require temperatures of between 18-20°C to spawn. Spawning therefore is normally restricted to late June and July. Egg size is 1.3 – 1.4 mm.

Tench are a bottom feeding fish and the presence of a trail of small bubbles on the water surface is often an indication of tench feeding below. Food consists of insect larvae and molluscs.

Float fishing with waggler floats and ledgering with arseley bomb or swimfeeder.

Maggots, sweetcorn, bread, worms, casters etc. with groundbait of brown crumb and a range of continental groundbaits and additives.