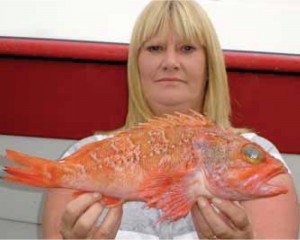 NEW RECORD BLUEMOUTH: Sue Tait from Cork with her new record of 1.32 kg taken off Caherciveen on 28th July 2008

To make a claim for a specimen, you must have caught a fish recognised by the Irish Specimen Fish Committee which is equal to or exceeds the Specimen weight for that species. The list of eligible species is not fixed as an important function of the ISFC is to act as a focal point for data collection on the occurrence of notable, rare or unusual species taken on rod and line in Irish waters. This has led to species previously regarded as unusual being added to the list of eligible species and species suspended from the listing being returned as length based specimens.

Examples from recent years include

The Irish Specimen Fish Committee recognised eligible species are divided into two different categories, Freshwater Species and Marine Species. To view The Irish Specimen Fish Committee up-to-date list (last revised 2020) of eligible Freshwater and/or Marine Species, specimen weight for that species, and Irish Record Weight of that species, click on the links below

The decision to establish a new specimen fish category is taken with due consideration of the information available to the Committee. One of the principle criteria is that the species should be captured in the ordinary course of angling. Other important factors include the numbers of the species taken over a given period, the distribution of the species and the weight of individual fish in comparison to their likely maximum achievable weight.

To begin the process of attempting to establish a new specimen fish category anglers are requested to submit a completed claim form for each fish captured. This is particularly important as it will establish a database on that species and enable further investigation and comparison of future claims. With most species the body will have to be forwarded for positive identification. Other arrangements would apply for large fish. The availability of the body is essential to allow the Committee to verify positive identification of the species. The claim form will allow monitoring of numbers and weights of the species. This facilitates assessment of the likelihood of capture, the likely specimen weight and the availability and seasonality of the species.

It is difficult to legislate for every situation that may arise but it must be stated that the final decision will rest with the Committee and will be based on a balanced review of the information available. While this process is progressing some details of interesting fish captured will be reported here and in the annual report as necessary.

For conservation reasons Porbeagle have been suspended from the specimen list.

Suspended from ISFC list of eligible species. In compliance with the CONSERVATION OF EEL FISHING BYE-LAW, eel remains suspended from the specimen list.

Sharks and rays (elasmobranchs) are a group of fishes requiring special consideration. In 1976 the Committee, in the interests of conservation, decided to remove the Common Skate (Raja batis) from the list of eligible fishes and not to consider any claims whatsoever, except for a possible new record (i.e. a fish weighing in excess of 100 kg (221 lbs)). It has since been retuned to the lists as a Length Based Specimen.

The plight of two further elasmobranch species, the Undulate Ray (Raja undulata) and the Monkfish (Squatina squatina), has become very serious. They are under serious threat due to commercial fishing pressure and the Committee is anxious that their situation should not be exacerbated by angling. For this reason Undulate Ray and Monkfish were removed from the list of eligible species for 2006 onwards. Claims for a new record in either species will be considered provided that the fish is weighed on shore, photographed and returned alive. This moratorium continued for two further years until December 2008 when the situation was reviewed and extended gain for over 10 years. These species were subsequently returned to the lists as Length Based Specimens.