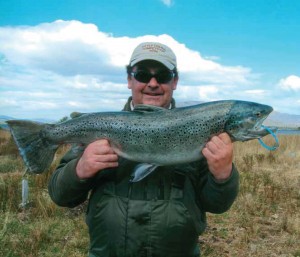 A very gamey fish which is a smaller cousin of the salmon. But whereas salmon remain in freshwater once they run a river seatrout may run in and out a number of times. Often a microscopic examination of scales is needed to differentiate a salmon from a seatrout. Finnock (fish which spend a few months at sea) or 1 Sea winter trout (fish that spend a full year at sea) dominate catches in Ireland. Lough Currane in Co. Kerry is one of the best sea trout waters in Europe.

Similar to salmon in colour but more thickset and often heavily spotted on flanks.

Sandeels, prawns and shrimp at sea, insects in freshwater.

Dependant on water conditions. The best flyfishing is often after dark. Are regularly caught at sea and estuaries are popular locations in some areas (Rivver Moy, Erne).

Traditonal flies, spinners and worm as conditions and rules allow.