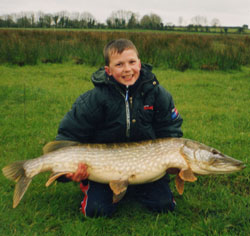 Ireland has produced legendary pike; several fish over 50lbs have been caught. The rod and line records of 42lbs 12ozs for a lough fish, and 42lbs for a river fish, do not fully give the measure of the biggest Irish pike, for greater fish swim in Irish waters. Pike can be found in almost every part of the country and they may be sought from boat or bank, in very big waters and very small ones. They can be fished for in every season, and they can also be caught by a wide range of methods; recently fly-fishing for pike has become very popular. It is important to sustain the high quality of Irish pike fishing. For this reason conservation regulations have been introduced to encourage the live return of all bigger fish. For further information about pike Conservation and Legislation see the following link: http://www.fishinginireland.info/pike/pconserve.htm

The pike’s body is streamlined, olive green in colour with a white belly. They have a large mouth containing many rows of backward pointing sharp teeth.

They spawn between February and April when water temperatures are less than 8°C. They attach their adhesive eggs to flooded grass, reeds and other vegetation.

A range of plugs, spoons, spinners, jerk baits, pike flies and a range of small deadbaits including herring, mackerel, smelt, sprat and other sea deadbaits.